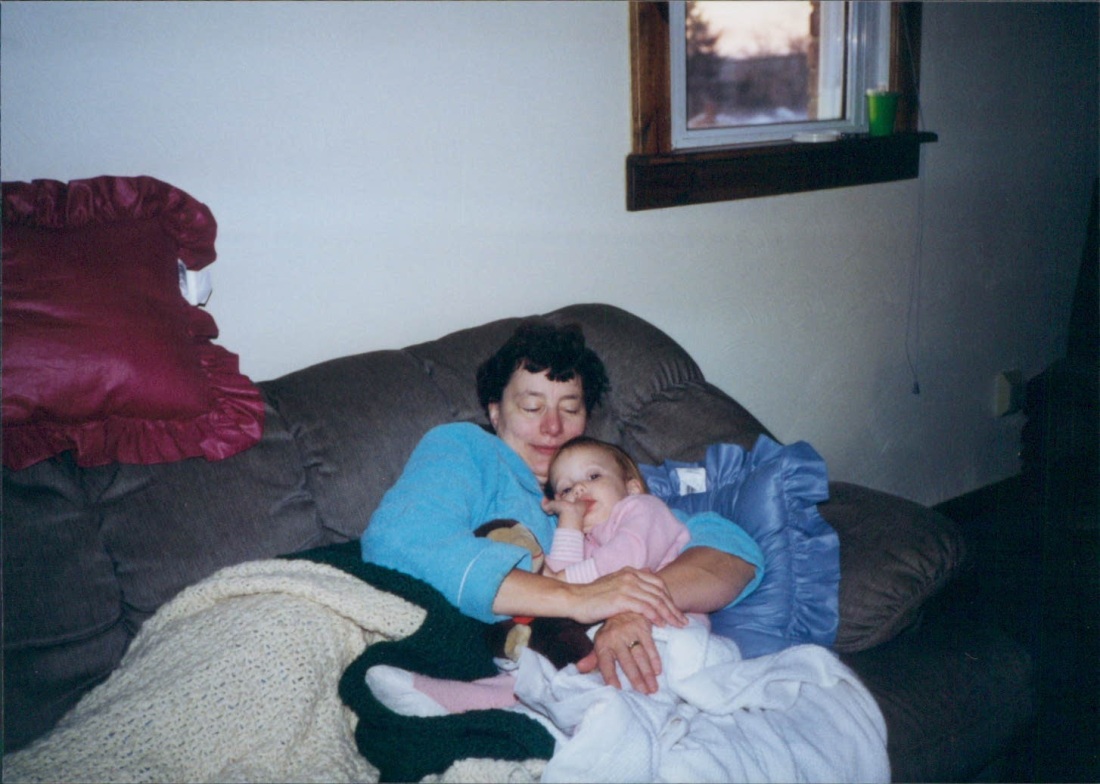 I lost my grandma earlier this year to cancer. On good days, I find myself starting to call her cellphone to tell her something exciting. I start dialing her number and then I remember. She’s gone. On bad days I cry, a lot.

I miss a lot of things about her, but mostly I miss getting to say her name aloud, well my name for her, Grammy. I never realized how often I would say that word until I lost her. Now her name gets caught in my throat as if I am afraid to say it. I think I hesitate to say her name now because I know she can’t answer me, at least not in the way she used to. But I don’t want to be sad. I have been sad long enough. I want to talk about my Grammy because of what she means to me.

Before she was diagnosed with cancer, my Grammy was the picture of health. She was superwoman. She took an exercise class that made me feel weak and lazy! Besides a broken ankle, I can’t remember a time when she wasn’t healthy. The only exception to that was the possibility that my Grammy had Alzheimer’s. Though a diagnosis was never given, and my family was split on their beliefs about the possibility, I believed it was possible. Alzheimer’s in genetic and her aunt had it. So it was possible.

During a trip to Italy in 2015, a friend of mine showed me Lisa Genova’s Still Alice. I started and finished the novel in the same day. I couldn’t put it down. I finally had something to help me understand what my Grammy was possibly dealing with. I remember sitting in the living room on my Grammy’s blue chair reading this book and wondering how similar her life could have been to Alice’s if the cancer had not taken her first.

Still Alice is a fictional story about a woman with early onset Alzheimer’s. I will warn you that it is not an easy story to read not because the book was poorly written, but because of the emotions it stirs. Even though Still Alice is a work of fiction, the disease is real and there is no cure. Alzheimer’s attacks the brain, it steals memories, loses words, and eventually forgets how to communicate to the rest of the body. Lisa Genova gives us a story that shows the deterioration of Alice Howard’s life over a two-year period. Genova’s writing emphasizes the stages of Alzheimer’s and forces the reader to understand the inner battle that the victim fights every day.

Still Alice opens with Alice pre-diagnosis. We learn that Alice is a highly respected woman. She is a Cognitive Psychology professor at Harvard University and is considered an expert in linguistics. Alice is giving a speech at Stanford when the first sign of Alzheimer’s appears. She couldn’t find the word. It wasn’t until the plane ride later that day that Alice remembered the word she was looking for, syntax.

I realize that losing a word does not mean that the person has Alzheimer’s. There could be many different explanations, but for Alice, this stuck with her and impacted her decision to go see her doctor. There were many other instances that factored into her decision to see her doctor, but this one opened the possibility to something being off.

That scares me. Something as common as forgetting a word or losing the name of something could be a symptom of a neurological disease. In one of the lines in the script before the start of the novel, Genova foreshadows the battle of Alzheimer’s and portrays neurons as being strangled by the disease. She writes, “whether it was molecular murder or cellular suicide, they were unable to warn her of what was happening before they died.” This imagery is unsettling to me. It’s powerful and Ican’t help but wonder if this is what my Grammy went through before the cancer took her? If that’s the case, I don’t know which one hurt more: losing life’s memories and all that made my Grammy important or the cancer that took away her independence? I guess eventually, both diseases would take her independence. But neither one ever took her spirit.

Throughout the novel, Alice answers a few questions that she has written on her BlackBerry to test her cognitive abilities each day. The questions involve her home address, daughter’s birthday, current month, office address, and how many children does she have. Each chapter ends with Alice answering these questions. As the novel and the disease progress, Alice’s answers get less specific. Where her home address used to include the full postal address, it now has been simplified to just Cambridge. This subtle technique that Genova uses is one of my favorite parts of the novel. I love how a simple four question test can show how detailed responses become one-word answers. The names of Alice’s children become just the number three showing that even the names of loved ones cannot win against Alzheimer’s.

One of the more powerful and emotional quotes from the novel deals with love. Towards the end of the novel, Alice asks her daughter Lydia what would happen when she no longer recognized Lydia and didn’t know that she loved her. Lydia responds that she will tell Alice she loves her, and that Alice will believe her. This causes Alice to wonder; “But will I always love her? Does my love for her reside in my head or my heart?” (Genova 267). Science says head while family says heart.

My Grammy never forgot any of her family members. She might mix up our names, but even I do that sometimes. If the cancer didn’t take her and the Alzheimer’s was diagnosed, I think that if she ever came to forget my face, she could never forget her love for me. I don’t think you feel love based on a face or even a memory. Instead, I think you feel love, literally. Almost like a warmth that makes you feel safe and not alone. You don’t have an explanation to why you feel it, you just know that you do. I choose to believe that not even Alzheimer’s can take that feeling away.

Still Alice is a heartbreaking story that resonates with you long after you have turned the last page. It doesn’t matter if you know someone with Alzheimer’s personally or not, Alice’s story will make you see how much the diseases takes from everyone. For Alice, the pain was felt by her husband, her three children, her colleagues, students, and even by the coffeeshop worker that she visited before teaching. Mostly though, Alice herself felt the pain alone. She had a support group and loved ones, but only she truly understood what was happening; “So even when I feel completely normal, I know I’m not. It’s not over, it’s just a rest” (Genova 186).

Alzheimer’s disease is not curable and there is not a true, 100% accurate test to diagnose it. With the help of books like this, we, as a community, can talk about the importance of changing this. The disease is not just for the elderly. Alice was in her 50s when she was diagnosed. Some people start becoming symptomatic even earlier. Still Alice has taught me to have patience with those that are suffering with Alzheimer’s because we will never truly be able to see the battle they are fighting every second of every day alone in their minds. Listen to them, have empathy, and don’t treat them like they are incapable of living. During one of the last good days, Alice gives her final speech for a Dementia Care Conference. In her speech she reminds us, “just because I’ll forget it some tomorrow doesn’t mean that I didn’t live every second if it today. I will forget today, but that doesn’t mean that today didn’t matter” (Genova 293). Today always matters and it should never be wasted. You don’t get a redo.

For as long as I can remember I have always loved what books could do for me. The text on the page gave me an out, an escape from the confusion of the “real world”. It was as if words were my lifeline, my safety net, but later, my demise. They took me in their arms to a world where the bad guys were caught and love was something to believe in. Yet, just as soon as I felt myself blurring the lines between fantasy and life, I remembered every book concludes with “and they lived happily ever after”.

I am 25 years old now and while children’s books have turned into 1920’s classics or modern-day thrillers, I still see myself within the pages. In each word, each profession of love, or each timid look over the victim’s shoulder as her fear takes hold, I lose myself right there with them. I think because I can find a piece of myself in the books I read, I can feel a sort of relief. The kind of relief that allows my cynical-self to believe in fantasies the way I did when I had not yet been told by the “real world” who I was supposed to be.

I like a happy ending strictly because it makes me smile. It makes me happy. Yes, most of the time I roll my eyes at the clichés, but I smile, and it feels good. The characters in whatever book I am reading will always have that happy ending. I know this because all books end. As for me, there is no always. It just does not work that way. There is right nows, laters, possiblys, and nevers. But that is okay, I have books to give me my always.

No one understands true love anymore. At least not with people. It is much easier to fall in love with objects, ideas, beliefs, or even how someone makes you feel. I am guilty of this. I fall in love with books. That is what I want you to get out of these blog posts. I want to show you how beautiful it is to fall in love with a book and that sense of security that it can bring.

Thanks for joining me!

That is the beauty of all literature. You discover that your longings are universal longings, that you’re not lonely and isolated from anyone. You belong. – F. Scott Fitzgerald